The History of the Rodney Amateur Radio Repeater 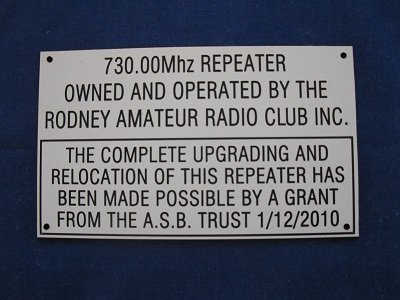 It was originally set up some distance beyond the end of Rodney Road on the eastern slopes of Mt Tamahunga (the highest hill in Rodney). From this site, the Oil Refinery and the Auckland Museum are visible . The site was good for the North and Auckland but gave very poor coverage to the West and for servicing it was a 70 mile journey.

To start with it was powered by a wind generator which had been dynamically balanced by the Naval Base through the good offices of Trevor Lowry the Council CD Officer ex RNZAF. It was supposed to turn out of the wind in gales but when a strong gale came it did not . It disintegrated we found the blades ¾ of a mile away.

We then approached Lucas and they imported a 12v 2 amp Solar Panel for us. Our repeater was the first Solar powered Repeater in the Southern Hemisphere. In fact this was mentioned in a publication by Cambridge University in England. At one stage this repeater was reported in the media as being a secret communication for the benefit of clandestine Russian submarines.

In 1975 it operated on the then Channel “D” but in 1976 with the new band plan, it was changed to Channel “B”. For quite a time the Panel was most successful giving 10% more power than rated due to the lack of air pollution. It had a transmit and a receive aerial each consisting of a radiator and reflector pointed towards Helensville this gave coverage to Auckland and there was sufficient radiation off the back to get into Whangarei. We constructed three Filters of tubular aluminium for the transmitter and three for the receiver.

The original repeater was constructed by Quinten Foreman ZL1QF and Tim Sheenan ZL1TNS as part of their University project. The repeater had the facility to shorten the length of the tail when the battery voltage dropped below a set level.

Eventually the original Panel developed an intermittent fault which later we determined was caused by the centre of the panel flexing though it was rigid at the edges. We then braced the centre of the panel to prevent movement. After consultation with the manufacturer we found the faulty area by progressively shading each cell, the output voltage would drop if it was not the one with the fault. Eventually we found where there was no drop. We removed the plastic coating and bridged the crack and sealed the opening as recommended by the maker.

Later the branch built a replacement repeater. We bought a second hand hardly used Kenwood 7200G transceiver and disassembled it. The receiver section, transmitter section and the control system was each reassembled in its own cast aluminium box .

It was designed to switch to low power when the battery voltage dropped to a pre-set voltage. In my opinion it was the best repeater we have had. It was mainly built and designed by Ralph Sanson ZL1TPG.

It had a very low power consumption. Because servicing the Repeater at Rodney road involved 70 miles of travel we shifted the Repeater to a site in the Dome Valley Hills which turned out to be an excellent site for coverage north and south and to the west and most of the county. It was a wooden building about 1 metre square but it was in marijuana territory. Vandals first of all put bullet holes in the panel and at a later stage stole the panel and batteries and burnt the building and its contents. With the Insurance money the repeater was replaced and installed in a concrete container it was alongside the Council CD installation also concrete. The drug people smashed through the concrete walls to steal the batteries and also did the same to the Council CD installation. We then decided that it was not a secure location, the Council came to the same conclusion with their installation.

The Repeater was then re-established at Schollum Road (not an ideal location ) using Tait equipment and was there until December 2010 when it was shifted to the present site, which has proved to be an improvement in coverage in the Rodney area which is really the main function for the repeater.

Below are several photos of the repeater housing at the new site with ZL1KEN, ZL2BCB & ZL2MR 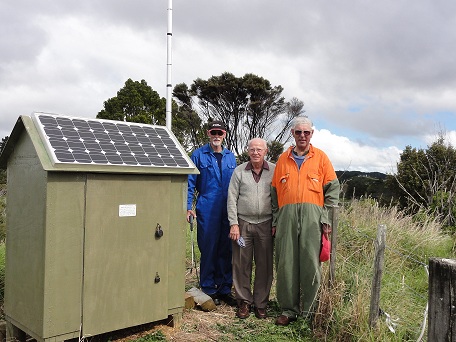 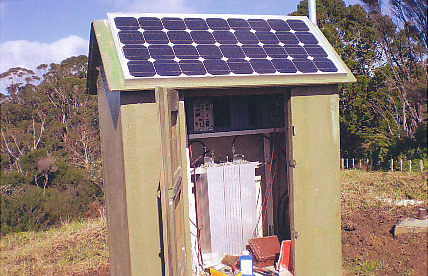 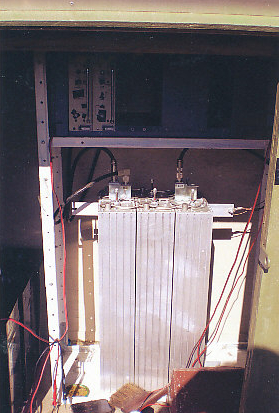 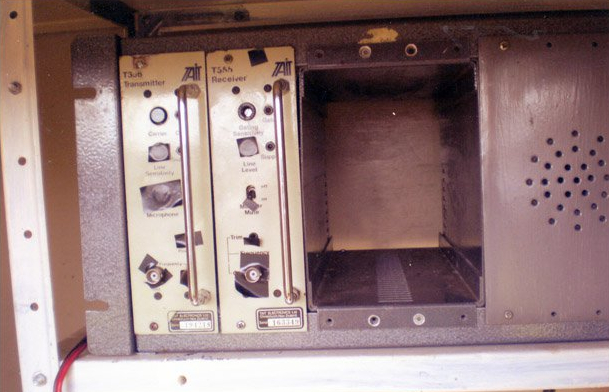 The Rodney 730 repeater is currently working fine. No reported issues.